Forsaken Trilogy: A Journey of Discovery

I started this trilogy with "Forsaken: Searching for God's Fingerprints" in 2011. Then came "Forgiven: Finding a path home," in 2016 and now in March 2020 "Forgotten: A Stepping Stone to the Stars." "Forgotten" brings to a close the story of Jarrod McKinley and his SETI team as they establish first contact and begin to work with aliens from a distant star system to explore the galaxy.

"Forgotten" brings new characters and new settings and carries Jarrod McKinley on more action-packed adventures on Earth and in the galaxy. It also deals with what the human species might do faced with with beings from another star system. Where is this star system, what kind of society and culture have they developed, what imapct will their existence have on people on Earth? How is it possible that in the vastness of space and time there is another species of intelligent beings with which we can communicate?

It's been fun exploring these issues and I hope you get as much enjoyment in reading books as I did writing them.

I'm not sure what will be next on my writing agenda, but I will let you know.

The year is 2088 and Jarrod McKinley is in deep trouble. The listening post he commands orbiting the Saturn moon Titan has just been hit by a massive energy wave. As he and his crew struggle to maintain life support, they discover there is a hidden signal in the energy wave. Jarrod manages to survive the inital wave but loses one of his crew. As he tries to uncover the mystery of the signal, he must survive several attacks on his life and on those around him. He races to Earth to solve the mystery and find out who is trying to hide the answer to the question, "Are we alone in the Universe?" 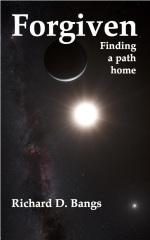 Eight months after Jarrod McKinley solves the Forsaken scandal, he has to return to Australia to find out who is calling him from outer space. Is the call real? Will it lead to first contact or just be another hoax like Forsaken? As he rushes for Wilpena Pound, mysterious forces try to capture him. He has to fight for his life and when he does he finds he has unseen allies work on his behalf. Darting from one close escape to another, the secret of this new message starts to unfold and brings with it a new chapter in man's quest for other intelligent life in the universe. 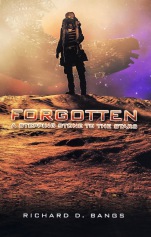 Forgotten: A Stepping Stone to the Stars

In the middle of defending Wilpena Pound from an attack by forces trying to control first contact, an alien force appears. How will that affect the  governments and private space companies competing for first contact control? And how will the aliens justify a long-lost effort to colonize Earth. Are Humans a cross between the aliens and early ancestors or did the aliens exterminate the indigenous population? As Jarrod McKinley and his team try to find answers, McKinley is given a new role -- explore the stars for a new home for Earth. What adventures will his forces encounter and how will they excape the dangers of an unknown planet?

Buy a signed copy of your books here with PayPal or a credit card.