Forsaken Trilogy: A Journey of Discovery

About My Life as a Writer

Married to Susan and the father of Ashley.

Now for the details:

I was born in 1946 in Havre, Montana, in north-central Montana. It is a regional commercial and educational community almost dead center on U.S. Highway 2 as it flows through the state. U.S. Highway 2 is the northernmost transcontinental U.S. Highway.

Also on this route is one of the nation's first transcontinental railroads, started as the Great Northern Railway. The Great Northern was the only transcontinental railway not supported by the U.S goverment by land grants. James Hill, a Chicago entrepreneur, started the GN in the late 1800s and by the early 1900s, was promoting free homesteading land along his rail route.

My grandmother, Etta Smalley, came to Montana in 1910 to homestead 20 miles north of the Great Northern line near a town called Inverness. She later married my grandfather William Bangs and the family has lived on the farm since. My brother Tom, still farms the same land our grandmother homesteaded in 1910. I have two sisters and four brothers.

The countryside around Inverness and Havre is full of wheat fields carved into long strips or hugh blocks of cultivated land. The grain fields are cut if a few places by creeks and rivers that meander through flat land. There are few mountains, just a small range to the south of Havre and the Sweet Grass Hills about 20 miles northeast of Inverness. Inverness was small, dusty, and, when I was growing, consisted of about four grain elevators, three churches, a grocery store, a gas station, a bar-hotel, a school with classrooms for grades 1-12, and about two dozen homes.

Some farm families had homes in town, but our family lived on the farm and I and most of my siblings attended a one-room school for the first eight grades about two miles north of the farm. After grade school we went to town to atttend high school.

It was a good life, if simple. We didn't have a lot of money but we always found something to engage our minds. We used our imagination to build forts and armies in the tree patch during the summer and snow caves and igloos in the winter. We rode horses and roamed over the hills and played on the cutbanks overlooking the Big Sage Creek that snaked through one of our pastures. The weather was tough, hot and windy in the summer and very cold and windy in the winter.

When I graduated from Inverness High School I attended Northern Montana College in Havre, studying auto mechanics and liberal arts for three years before transferring to the University of Montana where I entered the journalism program in the fall of 1968.

It was there that I met Susan, who would later beome my wife. She still is and I am a very lucky and better off with her love and support.

In the summer 1970 I was drafted and sent to Vietnam. I was processed out of the Army in January of 1972 and returned to the University to finish my degree. I graduated in 1973 and took my first job in Gillette, Wyoming. After about a year Susan and I returned to UM and entered graduate school. After a year we had the opportunity to go to work in Australia. Susan was accepted in a teacher recruitment program and we moved to Australia in the fall of 1975 where she taught in a suburban Melbourne school. I worked on a suburban newspaper based in Northcote, a Melbourne suburb.

After two years in Australia, we returned and after newspaper jobs in California, Wyoming and Montana, we landed in Denver where I worked for the Rocky Mountain News from 1981 to 1986. We have lived in the Denver area ever since.

The remainder of my newspaper career consisted of a short stint on a newspaper in Jacksonville, Fla., and then more than 16 years on newspapers in Castle Rock, a bedroom community about 30 miles south of Denver.

I retired from journalism in 2004 after starting up and running for two years a local daily newspaper in Castle Rock. The last five years of my working career was as a computer techician at a local bank in Castle Rock.

In 2005, I began writing Forsaken and had the first draft completed by June. After several sporadic rewrites and evaluations by critics, I returned in earnest to Forsaken in August of 2010, after I retired.

I began the final rewrites, editing and publishing efforts in January of 2011 and the novel was published in late July of 2011. 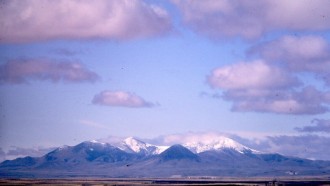 Sept. 28, 2020 -- Forgotten: A Stepping Stone to the Stars, has won Second Place in the 2020 CIPA EVVY Awards for Science Fiction. The announcement was made Sept. 10 via a Zoom virtual awards ceremony. "Forgotten" is now for sale on this website or online at www.iUniverse.com, www.Amazon.com and www.Barnesandnoble.com You can find all my books by typing in the title and  "Richard D. Bangs" in the search box. I also have books on hand that I can mail or deliver if near my home in the Denver area. "Forgotten" is my third novel in the sci-fi trilogy, "Forsaken." This third novel will wrap up the adventures of Jarrod McKinley in his search for extraterrestrial life that I started with "Forsaken: Searching for God's Fingerprints," and continued with "Forgiven: Finding a Path Home." "Forsaken" was published in 2011, "Forgiven" in 2016.

Kirkus review is positive for Forgiven. Click on "News" above to see the details.

Forsaken, Forgiven, and Forgotten are available in paperback and e-books.

Sales locations for the "Forsaken" trilogy.

Forsaken and Forgotten can be ordered from this website at a discount or  online at www.iUniverse.com. They, along with Forgiven, also can be ordered online at The Tattered Cover in Denver, The Boulder Book Store and at Barnes & Noble and Amazon.com.

Autographed copies are available by contacting the author via this Website or richnsusan@gmail.com.

FREE!!  Get chapter 1 of Forsaken here.

Read my Forsaken blog. I will be exploring some ideas I used in the sequel to Forsaken and will start exploring what I want to look at in the third book in this series.

If you have always wanted to ask me something, now is the time to go for it!
richnsusan@gmail.com